Wide applications of picosecond laser machine in the field of dermatology

Picosecond laser tattoo removal machine is short-pulse-width technology lasers with a pulse width of less than 1 nanosecond. For tattoo removal treatment, the shorter picosecond pulse width can more effectively destroy the tattoo particles in the skin tissue through the laser mechanical effect, further reduce the thermal damage of the surrounding tissue, and reduce the risk of scarring and pigmentation. In addition to tattoo removal, other applications of picosecond laser treatment in pigmented skin diseases and photoaging have been reported. 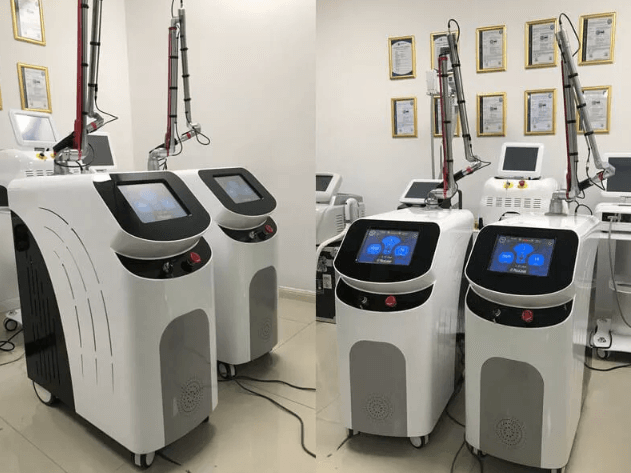 Picosecond laser has become one of the important means of treating dermatological diseases. Laser has developed rapidly in the field of dermatology treatment. At present, Q-switched laser has good efficacy and safety, and occupies a major position in the treatment of pigmented skin diseases. In recent years, picosecond lasers have begun to be used clinically. The ultra-short pulse width picosecond laser mainly acts on the target chromophore through the photomechanical effect rather than the pure photothermal effect, so some researchers believe that the energy density required for the picosecond laser is lower.

Its pulse width is much lower than the thermal relaxation time of melanosomes, which can further limit thermal damage to surrounding tissues, reduce the number of treatments, and reduce adverse reactions. Picosecond laser is mainly used for tattoo treatment, which has obvious advantages over Q-switched laser. In addition, the treatment of pigmented skin diseases has also received increasing attention. With the development of laser technology and the gradual deepening of people's understanding of diseases, picosure laser for melasma has now become one of the important means of treating dermatological diseases.

The optomechanical effect means that when the target tissue absorbs the laser energy, if the energy density exceeds a certain threshold, the instantaneous thermal expansion will generate a pressure wave, which will lead to the fragmentation of the target tissue. In clinical studies, it was also found that the skin tissue after picosecond laser treatment had vacuolization.

Understand the application of picosecond laser in dermatology

Q-switched lasers are currently the mainstay of treatment for benign pigmented skin diseases, but there is still a risk of hyperpigmentation and scarring in patients with skin types III-V. Since picosecond laser can effectively remove tattoos, its treatment of pigmented skin diseases has attracted the attention of researchers. Compared with traditional Q-switched lasers, picosecond lasers have relatively fewer treatments and no adverse reactions such as post-inflammatory hyperpigmentation.

Photoaging of the skin is mainly manifested by skin relaxation, texture changes, pigment spots, wrinkles and telangiectasia. Currently, it is mainly improved by intense pulsed light, exfoliation or non-ablative fractional laser, and chemical exfoliation. Some picosecond laser devices can realize non-ablative lattice mode through optical elements, such as special diffractive lens array technology, which is composed of 120 diffractive lenses, which can focus evenly distributed energy in the center of each lens, so that more than 90% of the Areas are exposed to 30% of the energy, while less than 10% of the areas focus 70% of the high energy, creating areas of tiny thermal damage to the skin and promoting collagen regeneration.

Acne scars can be divided into atrophic scars, hypertrophic scars and keloids, which seriously affect the mental health of patients. Common treatments include grinding, ablative and non-ablative fractional lasers, radiofrequency, chemical peels, and intense pulsed light. With the development of technology and the needs of people's daily work, safe and effective treatment methods are gradually favored by patients. Histopathology showed increased elastic fiber density and length in the dermis, and increased collagen III from baseline. The researchers believe that the picosecond laser DLA modality can improve facial acne scarring.

Picosecond lasers are highly safe. From the current research and clinical observations, picosecond lasers with various wavelengths are safe and effective. Picosecond lasers usually have mild and short-term side effects after tattooing, mainly manifested as erythema and edema. and spotting bleeding, no serious adverse reactions were reported.

In dark-skinned people, picosecond laser has high safety, and there are no serious adverse reactions in the treatment of tattoos and pigmented diseases. Although picoseconds are safe and have few side effects, the choice of energy in the treatment process, the number of rounds of treatment, and the overlap size of the light spot will all affect the treatment effect.

With the gradual maturity of picosecond laser treatment in clinical application, it has gradually become a common method for removing tattoos due to its excellent efficacy and safety. It also has certain advantages in other pigmented skin diseases and photoaging.

Therefore, we also need more large-scale clinical observations and comparisons with nanosecond lasers. On the other hand, comparative studies between different picosecond laser devices may help to establish standardized treatment protocols. In addition, exploring the therapeutic potential of picosecond lasers beyond tattoo removal will help develop more indications for picosecond lasers and bring new treatment options to patients. With the progress of picosecond technology and its development in scientific research and clinical practice, picosecond laser is expected to play a greater advantage in the field of dermatology.

If you want to know more how much is a picosure laser machine, please feel free to contact us, our sales manager will send you the price and machine details.